Fr. Keating’s interest in contemplative prayer began during his freshman year at Yale University in 1940 when he became aware of the Church’s history and of the writings of Christian mystics. Prompted by these studies and time spent in prayer and meditation, he experienced a profound realization that, on a spiritual level, the Scriptures call people to a personal relationship with God. Fr. Keating took this call to heart. He transferred to Fordham University in New York and, while waiting to be drafted for service in World War II, he received a deferment to enter seminary. Shortly after graduating from an accelerated program at Fordham, Fr. Keating entered an austere monastic community of the Trappist Order in Valley Falls, Rhode Island in January of 1944, at the age of 20. He was ordained a priest in June of 1949. 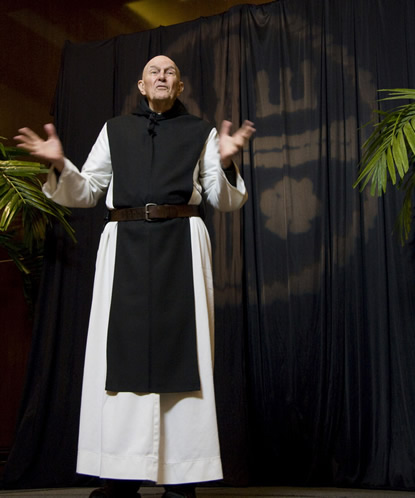 In March of 1950 the monastery in Valley Falls burned down and, as a result, the community moved to Spencer, Massachusetts. Shortly after the move, Fr. Keating became ill with a lung condition and was put into isolation in the city hospital of Worcester, Massachusetts for nine weeks. After returning to the monastery, he stayed in the infirmary for two years. Fr. Keating was sent to Snowmass, Colorado in April of 1958 to help start a new monastic community called St. Benedict’s. He remained in Snowmass until 1961, when he was elected abbot of St. Joseph’s in Spencer, prompting his move back to Massachusetts. He served as abbot of St. Joseph’s for twenty years until he retired in 1981 and returned to Snowmass, where he still resides today.

Fr. Keating is an internationally renowned theologian and an accomplished author. He has traveled the world to speak with laypeople and communities about contemplative Christian practices and the psychology of the spiritual journey, which is the subject of his Spiritual Journey video and DVD series. Since the reforms of Vatican II, Fr. Keating has been a core participant in and supporter of interreligious dialogue. He helped found the Snowmass Interreligious Conference, which had its first meeting in the fall of 1983 and continues to meet each spring. Fr. Keating also is a past president of the Temple of Understanding and of the Monastic Interreligious Dialogue.

Perhaps the biggest testament to Fr. Keating’s dedication to reviving Christian contemplative practices is his choice to live a busy, public life instead of the quiet, monastic life for which he entered the monastery. Fr. Keating’s life is lived in the service of sharing the gifts God gave him with others.